We’re halfway through the run of an in-gallery event series as part of the Institute of Sexology exhibition. Brian Lobel is the curator of Cruising for Art and explains how the rules and etiquette of cruising inspired this event format and how your eye contact, smile or wink may start a wild journey, tender moment or intimate conversation.

For two weeks at the Institute of Sexology, Cruising for Art brings unpredictability and live interaction to the already adventurous and bold exhibition. Each day, three different artists are spread throughout the gallery: some under tables; others inside Orgone Collecting Boxes; some just looking at exhibition pieces. Audience members grab a bandana to wear and so become cruisers, encouraged to make eye contact and connect with a stranger.  They cruise around the gallery hoping to make eye contact with a performer: while some performers are extravagantly dressed, others are dressed normally, encouraging people to make eye contact with everyone…who knows what can happen?

Blurring the boundaries between performer and audience has always been one of the most thrilling aspects of Cruising for Art which has previously featured in the V&A and Latitude Festival, among others. It opens up possibilities for unexpected conversations and tentative approaches between non-perfomers which genuinely mimic the motion of people looking to connect romantically, sexually or intimately. If an audience member and Cruising artist connect, the Cruising artist brings the audience member to a private space for a one to one performance. 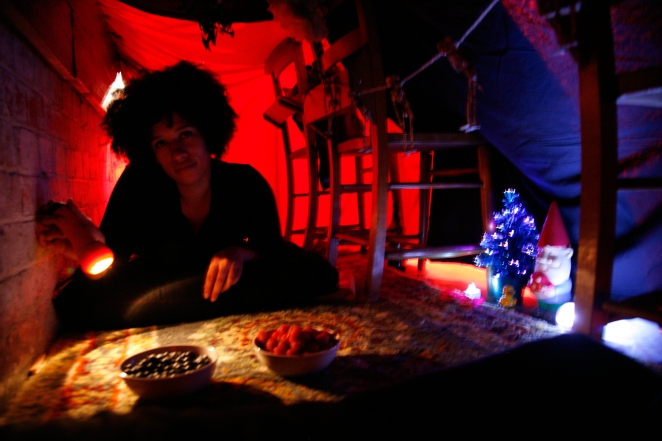 Everything About You (Season Butler), photo by Christa Holka.

Every performance is different and is created by the artist themselves. They can be funny, provocative, personal, sexual, simple, meditative… Audience members will see as many performances as they can “get” based on their own eye contact.

The rules of Cruising for Art are given to each participant and are derived from language used in a number of different Cruising Safely information pamphlets that appeared in the 2000s as part of different sexual health campaigns.

Cruising was first discussed academically in 1970  by Laud Humphreys in his infamous study, Tearoom Trade: Impersonal Sex in Public Places. Cruising is the search, by men from divergent backgrounds, for ‘instant sex’ in toilets, parks or in a variety of other public places. As a practice, cruising has an extensive history and its own set of codes, norms and etiquette, but at its core involves an encounter between two strangers who, upon completion, may never speak to or see each other again.

One key aspect of the cruising that Humphreys writes about, and the aspect that became an inspiration when creating Cruising for Art, was its silence. While the silence that surrounds cruising is, of course, connected in many ways to the history of silence surrounding homosexuality (or men having sex with men) and to the literal policing of such behaviour, the silence Humphreys describes seems to suggest not a lack of verbal communication but the presence of a different kind of communication.

It was not that language failed these men, but rather that their eyes, lips and body position all communicated through an intricate and learned system independent of speech. This silence, as an organising principle, feels inexplicably suited to the close encounter between two strangers, particularly two people who had to negotiate their desires without a verbal language to do so.

As part of The Institute of Sexology, seven artists have responded to the exhibition material with their own ‘cruise’: a one-to-one (or two-to-one) performance that begins with the meeting of glances and then takes its participants into playful conversations, sensual meetings, meditative silences and beyond.

The diversity of commissioned artworks mirrors the diversity of cruising encounters which were/are sexual as much as they might be funny, dangerous, sad or enlightening. Cruising for Art intervenes into The Institute of Sexology by not only highlighting this unique type of sexual practice, but by asking gallery visitors to consider their own relationship to the language of sex: how it’s discussed, how it isn’t and how this has changed (or not) over time.

Brian Lobel is a performer, teacher and curator, who creates work about bodies and how they are watched, policed, prodded and loved by others. He’s a Senior Lecturer in Theatre at the University of Chichester and a Wellcome Trust Public Engagement Fellow.

One thought on “Cruising for art”

My Tweets
Wellcome Collection is the free visitor destination for the incurably curious, exploring the connections between medicine, life and art in the past, present and future. You can find out more about us on our website.